MongoDB unleashes the power of software and data for innovators everywhere

MongoDB was founded in 2007 by Dwight Merriman, Eliot Horowitz and Kevin Ryan – the team behind DoubleClick.

At the Internet advertising company DoubleClick (now owned by Google), the team developed and used many custom data stores to work around the shortcomings of existing databases. The business served 400,000 ads per second, but often struggled with both scalability and agility. Frustrated, the team was inspired to create a database that tackled the challenges it faced at DoubleClick.

MongoDB, Inc. is the company behind the database for GIANT ideas, offering the best of traditional databases as well as the flexibility, scale and performance today’s applications require. We build MongoDB and the drivers, offer software and services, run MongoDB University (which has trained over 350,000 engineers in MongoDB), and sponsor the MongoDB community.

With offices across North America, Europe, and Asia-Pacific, we are close to where you do business. 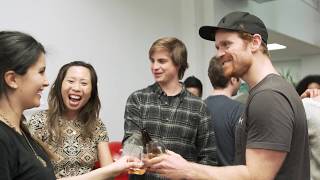